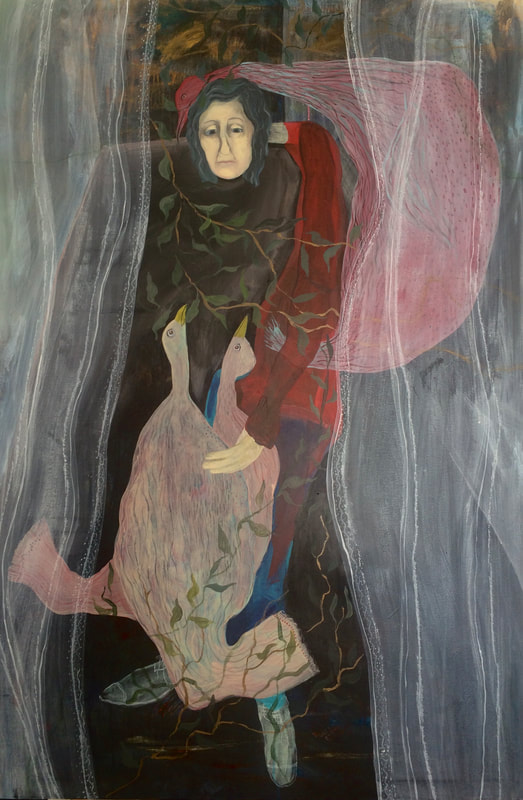 Summer 2020
​
​My work ordinarily shines a dim torch into the quiet corners of every day life. Prior to ‘lockdown’ the year had been spent between the House of Commons, political and media circles and the studio. By mid March I was in the middle of contacting art couriers and planning journeys to my private views across the country.

I had also been invited to see the Léon Spilliaert show at the Royal Academy which was a delight. I walked around, looking at the dark melancholy work, noting the cool northern European muted light, the sense of loneliness and isolation.

He, like me, leant on thinkers to give his work weight, he felt an affinity with Edgar Allan Poe and Friedrich Nietzsche, my intellectual friends are Thomas Sowell and Roger Scruton.

I think Spilliaert must have been like many artists, productive when isolated, perhaps a loner. Artists speak to each other through their pictures, alive or dead, we have long conversations, dialogues between ourselves, that go backwards and forwards through the centuries and between countries. A world without other artists’ work to relate to is empty and desolate, we are each other’s friends, even if one of us is dead.

A week or two after visiting the exhibition, I suddenly found myself in that hitherto unimaginable desolate and empty world. The galleries and museums had slammed their doors shut. Spilliaert’s work was now locked up in the Academy, my own works imprisoned in the Royal Scottish Academy, in the Hastings museum and in a New York gallery. And there was worse to come, suddenly a call, a distant relative had died, she’d got the new plague on Tuesday - dead by Friday, no one would go to her funeral. And I found myself imprisoned in my home unable even to go to the shops for food, with no end to the situation in sight.

My world was reduced to the news on the radio and the sudden influx of birds into my postage stamp garden. Blue tits now dived for my head when I got too close. Great tits wriggled themselves into a too small bird box hole, reminding me weight loss was in order, Covid took particular aim at plump people. Little robins came daily to have a splashing bath in the washing up bowl pond. Two blackbirds I called Horace and Muriel, fed fat worms to squawking babies just under my nose. And then there was the issue of the neighbours. They had morphed from indifferent, busy Londoners to a friendly, ever helpful, extended family of sorts. We had a problem though, there was a street ‘snitch’, as the street partied together once a week for three minutes, to music from their doorsteps, out came a mobile phone camera, attached to a long arm, stuck out of a front door, ‘click click’ the arm then wound itself back into the house, the door shut. The Police even turned up once to wave a finger, ‘you must socially distance’. The world had changed, a joyless combination of social distancing and a lack of privacy were the order of the day.

It is within this context I have painted ‘Curtain twitching’ based on a self portrait by Léon Spilliaert, ‘Silhouette of the Artist’ (1907). Alone, in the dark, by his window, framed by net curtains in a perpetual state of isolation. The painting’s haunting, melancholy quality, echoes my life today.